So I was looking at photos of kitchens on Pinterest—always dangerous. When I came upon this one:

It made me sad. Confused yet? First I talk about a cellar. Then a picture of a beautiful sink makes me sad. Bear with me!  I promise it will all come together. But first, let’s travel back in time.

I lived next to my grandparents growing up. Therefore, I spent A LOT of time there (understatement!). I wish I had had the wisdom to appreciate that place when I was young! There were chickens and rabbits. Sometimes there were goats or a horse. You could often find pigs. It really depended on whatever my grandfather decided to have around at the moment. He grew grapes. He had a couple of apple trees and a pear tree. Don’t even get me started on the gardens. Yes, gardens—plural! Massive gardens! Oh, how I wish that I had pictures to share. But back then we took pictures of family, not something we considered massive work…..and it was work for the entire extended family!

He was also a collector of much stuff. Some might call it junk. Get an episode of Hoarders out of your mind. He used his stuff to make other stuff. One of these items was a cast iron, porcelain coated sink. Well, it wasn’t in great shape. Just some discarded item. I must admit, I do not know where he got it. But I wouldn’t be shocked if it came from a dumpster. Yes, there was dumpster diving in my youth. Anyway—I sure can get easily side-tracked—he took that sink and made a little stand for it outside and my grandmother planted petunias in it. Most people at the time probably thought that it was rather tacky. I realize now that my grandfather was just ahead of his time! ;-)

After my grandfather died (when I was not quite 13), things just weren’t the same. He was definitely the glue that held everything together…how much so, no one realized until it was too late. No more gardening and canning. My grandmother stopped piddling with flowers. The sink grew only weeds. Now it really was just tacky lawn junk.

Fast forward to about 6 years ago. Pre-blog…so still no pictures. Use that imagination of yours! Picture in your mind’s eye a sink similar to the one above—but much larger--full of dirt and weeds, sitting in the elements for 25+ years (maybe a lot more…I can’t remember the sink NOT being in my grandparent’s yard). Man and I are starting to remodel our kitchen in our home in NC. I go to my grandmother and ask, “Memaw….you can say no if you want to…but can I have the sink that’s in the yard?”

Let’s just say, the look on Memaw’s face said that she was concerned for my sanity. It didn’t get any better when she asked me what I was going to do with it, and I told her I was going to put it in my kitchen.

Man was with my grandmother….He too thought that I had lost my” freakin’ mind”. Yet, he painstakingly refinished the sink. No money for a professional! Actually, he painstakingly refinished the sink about 3 times. He couldn’t get every single, microscopic “flaw” out of the finish! I had to remind him that I liked things to have “character”. He said things I can’t repeat!

The kitchen HAD to be designed around the sink. That sucker was HUGE! Many unrepeatable things were said during the cabinet build, rebuild, install, uninstall, adjust, etc, etc, etc. But it was finally in. The centerpiece of the kitchen. And yet NO PICTURES! Sorry. I had never even heard of a blog. I don’t even think we had a digital camera yet!

I got to use my sink for less than two years before we were moving to NY! We never even finished the entire kitchen remodel. A few upper cabinets needed to be replaced…so it was mostly done. Man got SUPER busy. My cabinets were designed by moi and built by Man and one of his friends. Believe me I LOOKED and LOOKED for cabinets like I wanted (now they are EVERYWHERE). Man finally told me to talk to a custom cabinet maker. But he told me this in front of aforementioned friend; who said, “We can build those.” That was the moment that I knew my kitchen would NEVER be finished! But I digress. Where was I? Are you even still here? If so please comment below! Oh yes….moving to NY. There was NEVER any question in my mind that my sink was coming with me. I did not care if all my other possessions were sold (okay, I exaggerate…but just a little), that sink was coming with me. Yep, I’m that person…the one that moves and leaves a huge gaping hole in the kitchen for someone else to figure out how to fix! Those people? My parents….but they were warned before papers were signed or money exchanged! My mother was more bothered that I was taking my kitchen island that Man and friend also built. 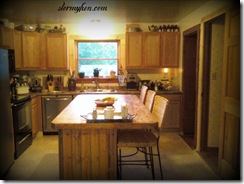 Look, I actually had a picture of the island. It was taken in this house when we first moved in about 3 1/2 years ago. Of course, the kitchen has been re-arranged since then—dozens of times—but it is a little too…umm…shall we say..in use at the moment for an update. What can I say…it’s Autumn…my serious cooking season.

So today when I saw the picture on Pinterest, I decided to take you down to visit my sink…in my cellar. Yes, that is why the picture made me sad. See once we got here, we decided that renting was a better option than buying---we don’t consider ourselves permanent NY residents. So my sink was placed in the cellar.

I hate the cellar. First you have to go down these: 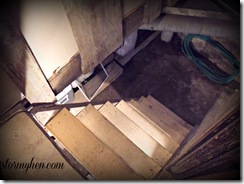 Then you find this: 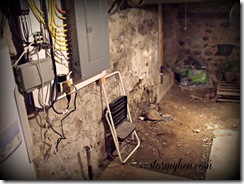 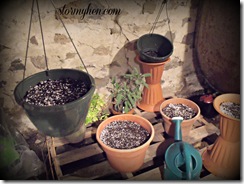 Man’s attempt at growing one of his favorite foods—cucumbers—during an Upstate NY winter. I’ll let you know how that turns out!

And then I turn the corner to find my sink buried under boxes and other stuff. So still no pictures….Sorry. I tried. I really did.

My poor, poor sink! Oh…I forgot to tell you…EVERY time my grandmother came to my house after the sink was installed, she asked for it back. Sorry, Memaw! I told you that you could say “no”!