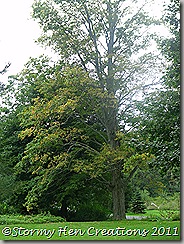 Yesterday, I turned 41 celebrated acknowledged the 12th anniversary of my 29th birthday. For as long as I can remember, August (birthday month) has been a time of reflection for me--What have I accomplished in the last year? what goals did I fail to reach? what can I do better in the year to come?—but, since moving to NY in 2008, add to that a deep dread of the coming change of the season…a longing to go back home…just a deep sadness. See, I’m a creature of habit. I do NOT like change….well, not drastic change. And believe me…after never living more than 3 miles from where I grew up, moving to NY was devastating.

Wow…this post has taken a depressing tone; which was not my intention. I highlighted the last paragraph to delete it, but decided that it is time to get REAL!

Anyway…all that to say: As September begins, it is time for some changes. Despite three years of hoping that my husband would decide that this “experiment” of living in NY is a failure, being in NY is my new reality. I have to be a grown-up (which sucks, BTW), and face it. Time to give up my one-woman pity party (albeit grudgingly) and move forward. 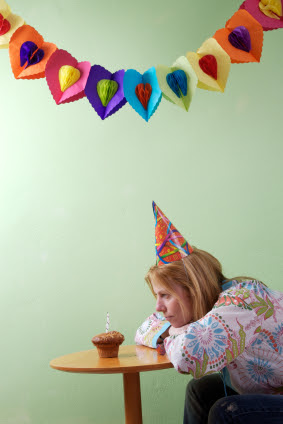 As I’ve stated before, we rent. Although Man likes (really likes, most of the time) living here, he doesn’t want to retire here. So we decided not to actively look for a home to purchase. Other than a very short period at the beginning of our marriage, we owned our own home in NC. Renting is an irksome state-of-being for someone known for knocking down walls, pulling up carpet, painting (walls and furniture), re-arranging furniture, etc. whenever the mood hit her. I have had/am having a TERRIBLE time trying to reflect ME in this house.

But in the spirit of moving forward, I’ve decided to take a deep breath and try again!

Here are some photos of my recent studio re-do (still not what I want, but getting closer…baby steps): 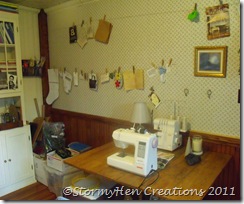 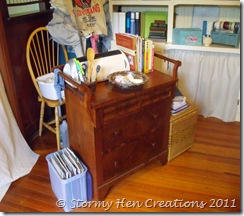 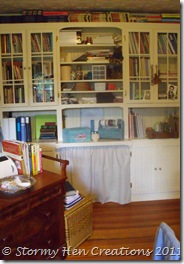 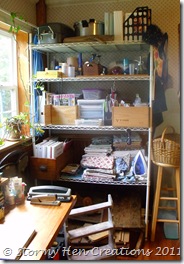 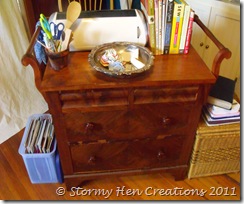 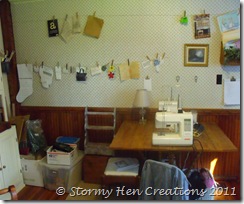 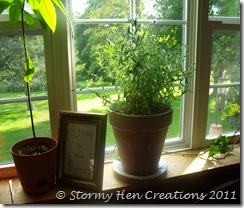 For BEFORE (and before BEFORE) photos go here.

Like I said…still not what I want, but at least I can find most of my stuff, and I have some room to work! I personally would like to go on a shopping spree for shelves and other organizational furniture, but Man has vetoed “big” shopping. While some of that is budget concerns (the economy stinks, ya know), his main concern is having to move it….eventually. He so dreads a future move (the actual getting stuff from point A to point B) that yesterday he told me to order myself an e-reader so that 1) he doesn’t have to build anymore book shelves and 2)he doesn’t have to “move those book shelves and even MORE books.” Moving twice (actually 3 times for him, twice for me and son—he came to NY alone to start his job; 5 MONTHS later he finally found a house for all of us; then a year later, we moved again) in 1 1/2 years, has left him with moving anxiety.

BTW, anyone have an e-reader suggestion????