After living here in Upstate NY for 3 years—only 20 minutes from Bouckville—I finally made it to Antique Week! Man and I were on a mission, one that we only maybe, almost accomplished. You know how it is…when you are looking for something specific, you never seem to find it. We were looking for a small cabinet for our bathroom. Since we rent, we need something that can be a temporary storage solution.

At first, I kept getting side-tracked! SO MUCH to look at! When we came to a tent full of buttons and fabric, Man stopped, took out the money clip and handed me LOTS (relatively speaking) of cash. I handed much of it back to him and reminded him of how CHEAP I am! Here is what I bought there: 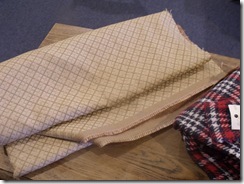 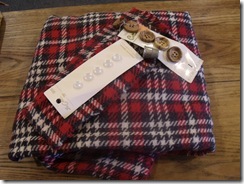 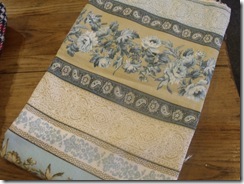 And this heavy-weight cotton print. I apparently like this color combination, because I have several other similar fabrics already sitting on my shelf. (Note that these photos were taken AFTER I was home….because the first 30-40 minutes I was at the show, I completely forgot that my camera was in my bag. I really am a terrible blogger.)

As I finished paying for my fabric, I spotted Man across the lane….checking out fishing lures. Check them out was all he did. There were lots of bargains to be had at the show; but if there were any bargain fishing lures, we didn’t find them. Poor Man. On our way back out to the road, Man spotted this: 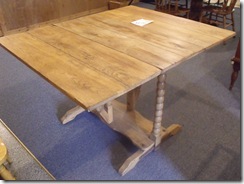 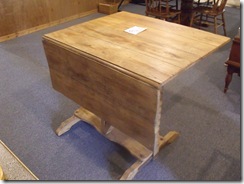 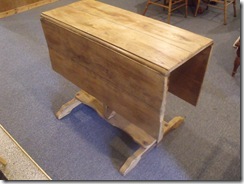 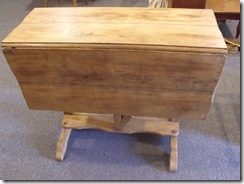 My new sewing table. I am sure that Man thought I would bring it home and refinish it. Wrong! I actually love its rustic charm. The only “refinish” its going to be getting is a good rub-down with some Tung oil, mainly to condition the wood. The Tung oil will also help enhance its charm. As Man was negotiating the price of the table, a lady in the booth asked if he was a “picker”. I knew what was coming…a confused look. I explained it to him later.

After purchasing the table, Man reminded me that we were on a mission. No more major buying until we found what we were looking for!

We walked up and down Route 20. 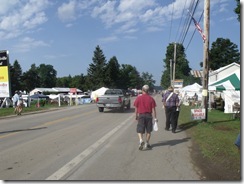 We walked in and out of the fields where the tents were set up. We saw lots of neat things. 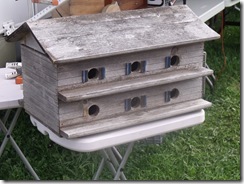 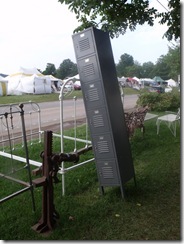 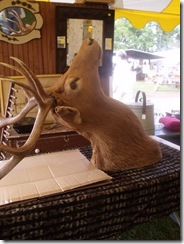 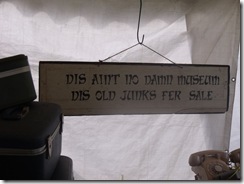 I LOVE that birdhouse, but I barely got to take a picture…much less hunt down the owner to find out the price. Man was leaving me at a rapid pace. I had to keep up. I saw the locker and though “um…where could I put that?” Man didn’t even slow down. He was on a mission. “Let’s find that cabinet; then we can slow down and just look.”  Need a trophy for your wall? I saw numerous deer heads, a moose…even a bull. That one shocked me so much that I forgot I had a camera hanging around my neck! So, sorry…you’ll just have to imagine that one.

On down 20 we walked and walked some more. No luck on that side of the road. So we crossed over 20. When I saw these, I had to stop and take a picture: 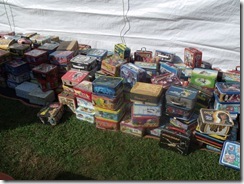 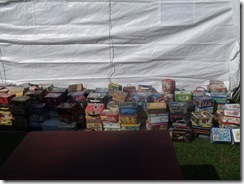 If you collect vintage lunch boxes, there were a few in this booth! Plus a few thermoses… 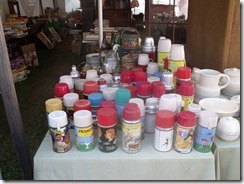 I know these aren’t the greatest photos…no time to readjust settings. Man was moving on…as a matter of fact, he came back and got me at this booth. Okay, okay….I’m coming.

Back onto Route 20…into another area of tents….still unable to get any photos….Man having no sympathy that I’m trying to be a better blogger. BUT FINALLY, we found this: 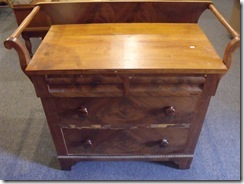 (Yeah, I know….more pictures from the living room.) Man spotted it. I was absolutely shocked that he even paused more than a few seconds, because Man doesn’t like things with “character”. Especially this kind of character… 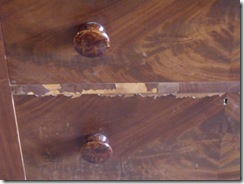 He looks at me (obviously desperate to get back to looking at fishing lures), “Can you do something with this?” I’m thinking, “yes, I can; BUT NOT for $95.” I told him I could remove the broken veneer…and I likely would have to paint it….and most likely it would have to have a distressed finish to disguise the damage. All things that Man hates! By this time the owner was there ready to negotiate. I checked it over. This is a solid, well-made piece. The drawers are dove-tailed. They slide in and out relatively smoothly. The veneer is only on the drawers and what-ever those pieces are called that divide the drawers. Do they have a name? Then Man pulled out the tape measurer. Of course….4 inches wider that our space. He did a quick mental re-arranging of the washer/dryer that are also in the bathroom and decided that maybe….just maybe, it might work. The jury is still out on that one…but for $60…still I’m in shock that Man let it come home with us.

I also spotted this wooden case at the same booth. 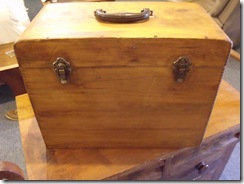 See that scratch down the front? Well…that wasn’t there when I first saw it. But when I picked it up to get a closer look, the object in front of it had a wire sticking out that I didn’t see…and well…oops. It’s okay…I was bringing it home regardless. $15 was more than my cheap self wanted to pay, but I wasn’t about to try to negotiate that one…Oh well…at least I didn’t damage anything I couldn’t afford! Plus a little wax and that scratch will just be a memory.

It was time for a bite to eat…then off to another field. Time to finally take things in at a slower pace. 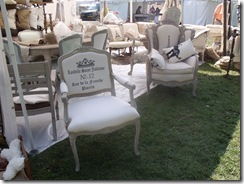 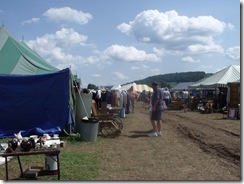 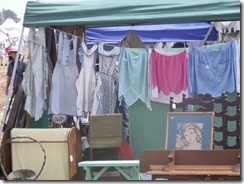 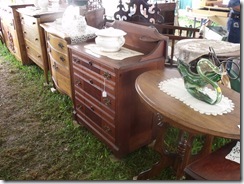 And then it happened…yes, wouldn’t you know it….a sudden headache. One of those nasty—if I don’t take care of this quickly, it’s going to become a migraine—headaches. Thus ended my day at the Antique Show.

Thankfully, I WAS able to head off the migraine. (Thank you Excedrin!…and nap.) Recently I have had several migraines, which has done very little to help my project list! And yes, I have discussed it with my doctor…she is pretty sure that it is my nasty little, uncooperative thyroid gland. Hopefully, an adjustment in my meds will take care of the problem….but for today, it may have saved my husband $$$! Although, he did tell me if I felt better that he would take me back tomorrow. Oh the relief when I told him to just go to the lake instead! I knew he would rather go fishing…and that project list of mine isn’t getting any smaller!

For the truly curious…total damage done: LESS than $200, including: parking, purchases shown above (plus a chrome-plated zinc and ceramic salt and pepper grinder set that I forgot to photograph..NIB $5!), and over-priced (you know it’s true) food-vender breakfast for Man and lunch for both.