Emulating the Queen of Funky Junk?

So, as many of you know, Funky Junk Donna and Miss Mustard Seed have issued a challenge to copy their styles. While I have many Miss Mustard Seed-esque projects on my to-do list, most of them are scheduled for MUCH nicer weather. Therefore, I decided to focus on copying Donna’s very unique style. It is very laid back…use-what-you-have…in a different-sort-of-way style. A kind of--try it and if it doesn’t work, move on—style.
On to my story of trying to meet the challenge….
Back in the summer, Man came home with an old record(?) cabinet. Someone had tried to repair it and had made a terrible mess of it. After thoroughly checking it out and TRYING to come up with a way to save it, I finally realized that it was beyond repair. I was sad…it had wonderful lines….as soon as I had seen it, I KNEW what I wanted it to be. But alas…it was not to be. Instead I took it apart. I then  put the pieces in my studio waiting for them to speak to me. The back of the cabinet immediately told me it wanted to some sort of sign…something rustic….and it wanted to live in the kitchen. 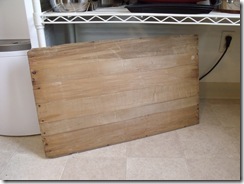 So I moved it to the kitchen….where it hid some pantry overflow. Then yesterday, while I was cleaning, it yelled at me. Quite rude…I was in a serious cleaning mood. You know…a clean the baseboards kind of cleaning mood. But seriously, that piece of wood would not shut-up! It wanted to be a part of Donna’s challenge. I had to hurry!!! 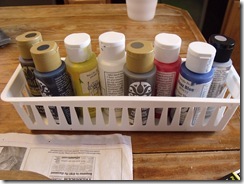 Out came some paints… 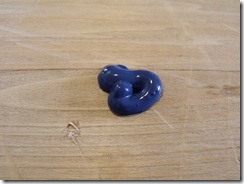 A little squirt of navy here and there. 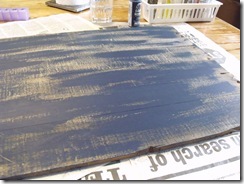 Some strokes with a dry brush and the base was done. Off to clean while it dried (although my serious cleaning mood had flown away). 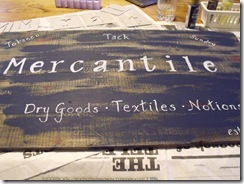 A combo of some stenciling and some freehand for the letters. Good, but not quite there yet. Walk away…let it dry…think about it. 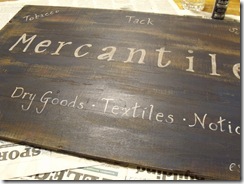 Later…I mix some water and burnt umber paint. Then a wet brush lightly coats the sign…give it a couple of minutes……okay, good. Take a dry paper towel and pat. Walk away…..
Once I returned to it, I grabbed some sand paper to give it a little more distressing. Well…that didn’t quite work out as planned. I’m glad I just worked on a really small area. Instead of exposing the wood, it just made the paint nice and smooth and PRETTY. Hey, I wasn’t looking for pretty! I was looking for OLD and NEGLECTED! Unfortunately, that dry wood had really sucked in the paint. But that’s okay…it is still pretty banged up. So I can live with it…just wish I had skipped the burnt umber wash on parts of the exposed wood….Live and learn!
While my sign is wanting to return to the kitchen, I decided to use it in a little “Funky Junk” staging…. 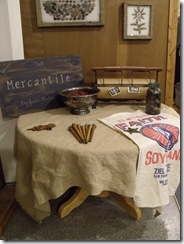 That table…under the burlap…that is one of my Miss Mustard Seed projects for this summer!!! I am SO OVER blonde wood!!! But until then, it has become the base for some change-with-the-seasons (or my mood) vignettes.
Some close-ups: 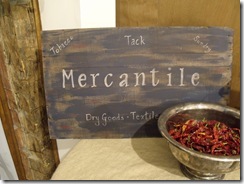 The sign next to an old, tarnished silver-plate bowl filled with dried peppers from last summer’s garden. (The bowl is for sale in my shop.) 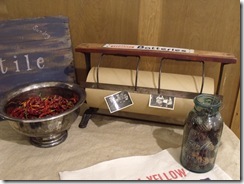 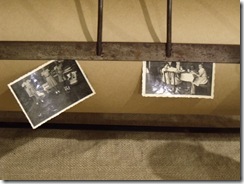 My old paper dispenser that I’ve had for YEARS…that I found in an antique store, fell in love with, and paid a RIDICULOUS price for. However, I can’t say that I regret it…because I really do love it. The photos were a recent thrift store find…they have writing on the back, but I am not sure what language it is written in!!! The only thing I can make out is the year: 1944. Man doesn’t understand WHY I would want to buy photos of people I don’t even know. Men! And under the old canning jar filled with small pinecones… 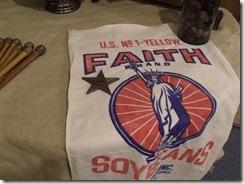 a wonderful old feed sack. She hasn’t told me what she wants to be yet…I tried to force her to be a temporary curtain. She didn’t like it. So I opened up the bottom seam and closed up the top opening…to make her into a slipcover for a dining chair. She HATED it. She liked the idea of it, but the look just didn’t work for her. For now she is happy hanging out with some funky junk. She is good friends with that rusty little star.  Although she does NOT consider herself junk! 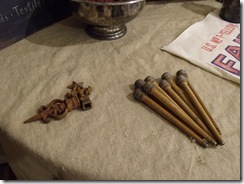 A few more treasures from the local thrift store. 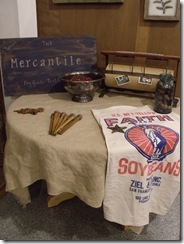 Now…if I can keep Man from adding his ice fishing stuff or his gloves or his phone or WHATEVER happens to be in his hands as he walks by the table….not sure WHY he thinks that is okay.
Some bonus funky junk….the type that I wish would disappear mysteriously in the night, but Man loves….and it IS interesting, just not MY thing: 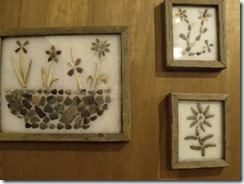 This “artwork” (I call it: advanced macaroni art….yes, I’m mean.) is made from old arrowheads, pottery shards, antique buttons, and RATTLESNAKE tails. Like I said, INTERESTING.
Thus ends my attempts of emulating the Queen.
Now head on over and check out the other entries! 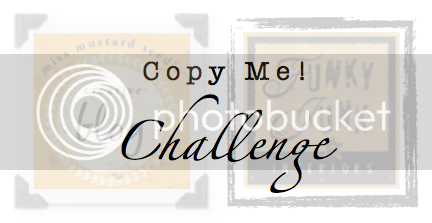