So I was organizing some files in the studio today. I was wishing that I was not so cheap frugal and had pretty decorative folders to fill my file boxes, but I use A LOT of file folders (both hanging and straight-tab folders). I just cannot justify paying that additional cost. As my morning was going on, I had moved some decorative paper from my work table to my idea line. I also came across some Mod Podge that I had purchased at Wally World a few days ago. I have never decoupaged. Well…perhaps some Elmer glue project from kindergarten, but let’s not count that here. Anyway, I had bought the Mod Podge thinking that perhaps I would try it sometime. You know….one of those “just in case” purchases. When suddenly it hit me: I could try making my own decorative folders with my cheap inexpensive decorative paper from the $ store, the folders that I already have (bought in bulk), and my Mod Podge.
Since I was suppose to be organizing and cleaning, I only took the time to make one. I used the ugliest least attractive paper from the pack, but even it looks MUCH better than the plain hanging folder. Here it is: 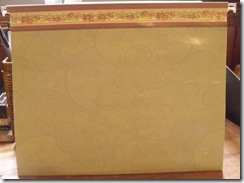 Now….back to cleaning and organizing.
Posted by Sammi at Tuesday, August 24, 2010

Email ThisBlogThis!Share to TwitterShare to FacebookShare to Pinterest
Labels: Ideas, Samples, Use What You Have